No Recovery in Sight for Libyan Oil Production

The situation in Libya has deteriorated in recent months following the ouster of Gadafi in 2011. Libya is an OPEC member and has the largest oil reserves in Africa. Bloomberg surveys suggest that Libya produced 370 000 bpd (barrels per day) of crude oil in December 2015. However, the country easily topped the paltry figure with its production of 1,6 MMbpd (million barrels per day) of crude oil in 2011.

The civil war of 2011 in Libya led to the first large drop in oil production. However, the production of oil after Gaddafi’s defeat was quickly picked back up by rebels who seized the facilities and started selling crude to world markets again. Since then, mismanagement by rebels, deterioration in the security environment and the closure of ports, oil fields and pipelines has led to yet another collapse in the production. 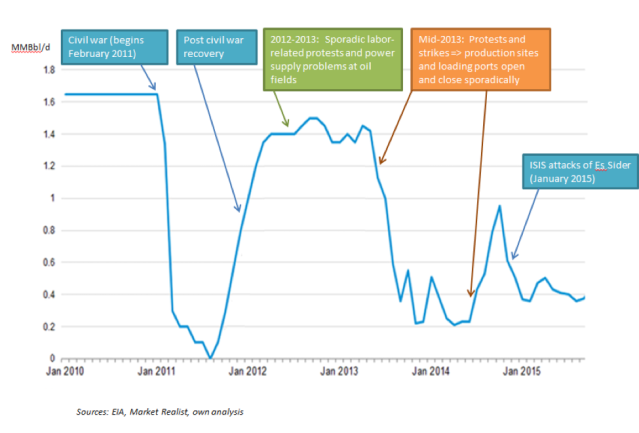 On January 5, 2015 ISIS attacked the largest port in Libya, known as Es Sider, and set fire to the oil tank at the port. US oil companies like ConocoPhillips, Marathon, and Hess are strategic partners with the Waha Oil Company operating in the Waha, Samah, Dahra, and Gialo oil fields, and using the load ports of Es Sider.

International oil producers like Eni and Total also have strategic ties with Libyan oil producers. Libya’s Es Sider and Ras Lanuf ports can together transit more than 500,000 bpd of crude oil. But, they have been closed for more than one year due to security concerns.

According to the Libyan NOC (National Oil Corporation), Libya plans to resume crude oil production in 2016. The NOC has reported that the company is reopening export terminals and taking initiatives to resolve issues to resume production at the Sharara and Elephant oilfields. However, recent attacks by the Islamic State raise questions on whether Libya would resume production or not.

Additionally, a crude oil glut in the market caused by lower global demand and Saudi overproduction has compounded the complexity of the situation. Libya’s entire economy was based on hydrocarbons, and as a result of the slump in production, many Libyans have lost their jobs as the welfare state that Gaddafi set up continues to unravel. Social unrest is at an all-time high, with chaos reigning in many parts of the country. The very real levels of instability and volatility in Libya preventing oil transit, however, dwarf unfavorable terms of the oil market. Libyan oil is still profitable… the only problem is getting it to market.

The most organized force in Libya seems to be the resurgent ISIS group. Even if ISIS were to re-establish control in key parts of the country, it would raise a dilemma for the buyers of Libyan crude. Doing business with a terrorist group is illegal under international law. Political considerations would have to be taken into account before any country could commit to purchasing Libyan oil.