UK RECEIVES ITS FIRST LNG CARGO FROM AMERICA: BUT IT’S NOT FROM THE US!

On February 21, 2017, UK has imported its first LNG cargo from the American continent: Peru LNG’s tanker called Gallina brought some 60 thousand tonnes of LNG. The price of this delivery was linked to the UK’s National Balancing Point. The tanker came from Peru via the Panama Canal, which was recently expanded. Royal Dutch Shell has a 100 per cent off take agreement with Peru LNG.

What are the implications of this delivery for LNG markets? To answer this question, I will look at some issues at the UK’s natural gas market; then I will discuss the importance of the deal for Peru, and in the end draw conclusions about overall LNG trade.

UK natural gas industry and the role of LNG

UK consumes 73 bcm of natural gas annually – it is 15% of total natural gas consumption in Europe, more than any other country in Europe.[1] Since 2004, as a result of a drop in domestic natural gas production, UK is a net importer of natural gas (Figure 1).

It is obvious that the largest share of UK’s LNG is coming from Qatar, which makes the UK rather dependent on Qatari supplies. At the end of 2016, this proved to be a source of some problems, as Qatar diverted its supply from Britain to Asia (deliveries going to Malaysia and Taiwan, as well as to Japan). This means that the amount of gas available to the UK decreased. In this situation, it was only logical that UK started to look for new sources of supplies, and Peruvian LNG was apparently even easier to arrange than any other source in North America.

Peru is the newest UK’s LNG supplier: the first cargo of liquefied natural gas from Peru was scheduled to arrive on February 21. 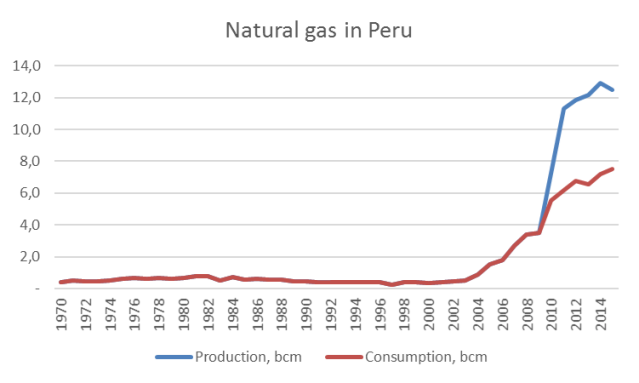 In 2014, Peru exported 5.7 bcm of LNG in 2014 and has therefore become a noticeable LNG exporter. Peru LNG was actually the first LNG export facility in the whole South America.[4] In 2014, 4.3 bcm out of all of 5.7 bcm exported went to Mexico.[5] The deal with the UK might therefore signify a new page of Peru’s LNG development, as well as a transformation of Peru into a global player.

Outcomes for the international LNG trade

If Peru transforms into a consistent supplier of LNG to the UK, this might indeed be a significant development in international LNG trade. However, such outlook is not guaranteed.

Firstly, there are some questions about actual cooperation between Peru LNG and Shell. Two parties had some issues over royalties on the export of Peruvian LNG to Mexico last year[6] and their future cooperation might be under question as well.

Secondly, there might be some strong competitors for Peru when it comes to the supplies to Europe. Supply of LNG is expected to increase by almost 50 per cent between 2015 and 2020, as it’s becoming more competitive than coal and other power sources. Russia, US and Canada are all going to compete for their share in European LNG market.

But both of these factors should not overshadow the fact that the first American LNG supplies to the UK were not from the US (as expected after the increase of natural gas production along with the shale boom), but from South America.